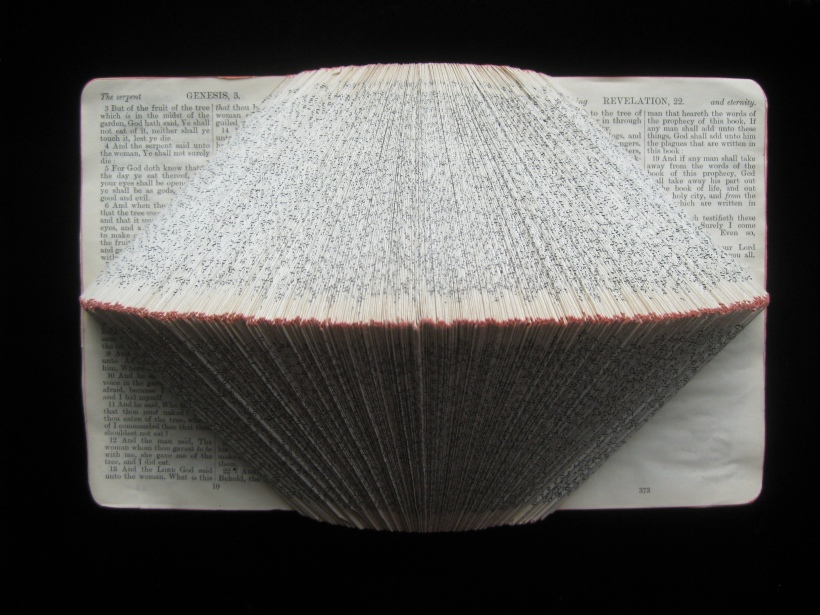 Simply folding the pages of this Bible resulted in an elegant, geometric form. The red line itself manifests from the visible leftover edge of the pages which are tinted red and bound in black leather. This Bible is a King James version published in 1896. It is what is called the Self-Pronouncing Edition which, sadly, does not mean that it reads itself.  Rather, this edition uses a pronunciation scheme for every proper noun, e.g. any mention of God is qualified by (gäd), and Jesus (ˈjēzəs) etc. It is astonishing that every iteration of a proper name includes pronunciation diacritics. You’d think that by the end of the first chapter, the reader would have a handle on how to say g-o-d.  No, this version is intended for the stubborn or dull-witted reader who needs constant–almost needling–guidance over the course of 1000 pages.

The title page is especially floral, and reads:

A few beautifully detailed and colored maps of the Holy Land were reproduced at the end, after Revelations. I cut out the maps before making this piece so I could use them in another project.  Amen.

ephemerarium I am a librarian and artist living in Eugene, Oregon -- where it is often damp and always green.