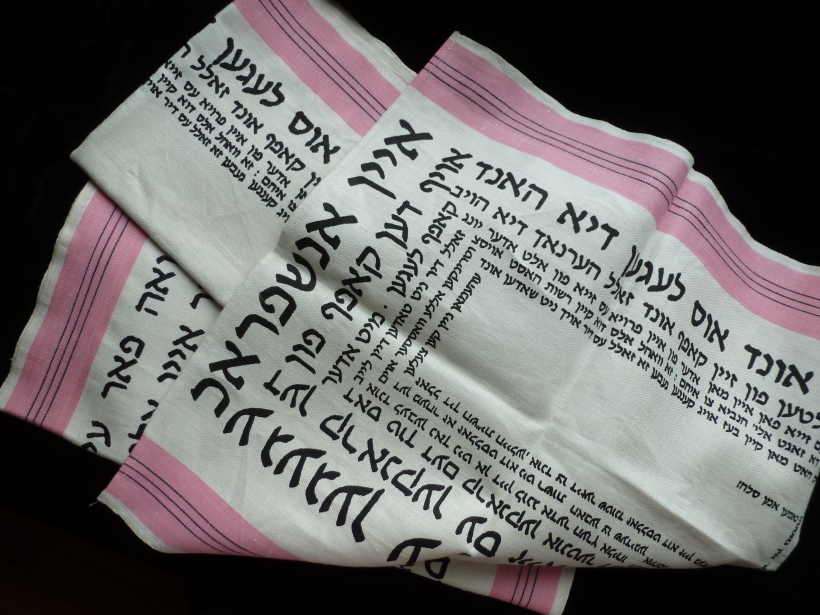 This is a project from last fall, a set of 5 linen dish towels. The towels are screen printed with an 18th century tkhine, a vernacular form of prayer made by Jewish women.  As in many religions, some forms of Jewish women’s religious practice are vernacular, i.e. specific to a locality of practice rather than canonical learning or formal liturgy.  In this sense, the tkhine is akin to other types of belief practices women perform all over the world, activities rooted in the locations and realities of everyday life rather than the formal confines of a synagogue/mosque/church/temple from which women are often exempt or excluded.

This particular prayer is from a book called The Merit of Our Mothers: a bilingual anthology of Jewish women’s prayers, published by Hebrew Union College Press (1992).  The tkhine is described as an incantation against the ayin hore (evil eye), and is written in Yiddish using the Hebrew alphabet.

The prayer requires the woman offering blessing to wash her hands, and lay them on the head of the inflicted while reciting the prayer.  Here I have provided not only the prayer but a towel to dry the hands after washing.

ephemerarium I am a librarian and artist living in Eugene, Oregon — where it is often damp and always green.